If I had a dollar for every time I’ve overheard this at a funeral or cemetery conference or regional meeting - well, I’d probably have an extra $100 dollars in my bank account or more.

I once (more than once) sat with a funeral home owner who told me that social media wasn’t worth it, and when I checked out his funeral home’s page, the images uploaded weren’t great, the posting was inconsistent, it was dominantly obituaries and very generic grief content and let’s not even go into the quality. A few months later, that funeral home is struggling to survive.

I’ve also had the privilege of monitoring private messages to a funeral home DISRUPT Media handles social media for, and there I've witnessed, first-hand, people sending a screengrab of a post we’ve made and saying “I want this”.

So what’s the difference between the funeral homes in the first scenario and my client?

For the most part, it's simple - there are some basic mistakes that funeral homes and cemeteries repeatedly make in social media marketing which are limiting their capacity to grow an engaged audience and establish seeded relationships.

Here are some of the most common missteps that I see:

1. They don’t know their audience

This is crucial, because not having this part figured out means that you’re trying to talk to everyone, which means you’re really just shouting into the void and hoping that somebody might hear.

Of course, funeral homes know who their audience is, consumers 50+, but they assume Facebook is for a younger demographic so they don’t give credit or the time deserved to create and target a message to their core demographic. Contrary to what funeral professionals think, 75% of consumers over the age of 45 are Facebook users, but when the content isn’t hitting the correct audience then you have a problem creating a connection.

If you’re unable to make a connection with people and build a relationship, then don’t count on being able to sell them anything. Understanding who your target audience is - what they want, what they need, where you fit in, etc. - is critical to maximizing your social media marketing performance.

2. They are not consistent, just generic

In this new world of social media algorithms - and really, all along - being consistent is key to growing an audience.

But to clarify, this doesn’t mean that you need to publish every single day. Being consistent means coming up with a schedule that works for you and your audience (when are they online and engaging most) - then most importantly, sticking to it. For example, we have funeral home clients that get the most engagement when posting between 6am-7am while other clients get the most engagement when posting mid-afternoon.

The key to maximizing your social presence is strong messaging, and content that’s aligned with what your audience needs to see. Automating this process, meaning, paying for content that is generic (grief and inspiration, could make sense for any funeral home or cemetery but not specific to yours) isn’t going to get the job done. You’re just posting to post.

Post regularly, keep your audience informed, and over time, with organic content, you will gain more trust and build relationships. 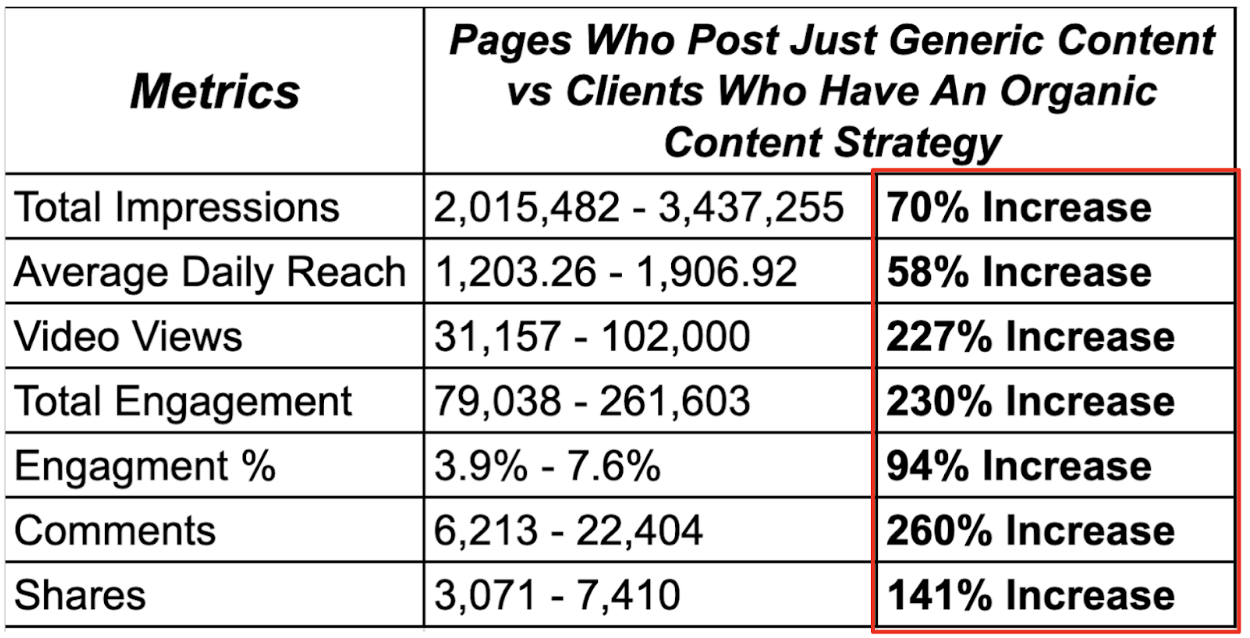 3. They are just trying to build a following, not potentially customers

I'll say this time and time again - the days of just accumulating followers like baseball cards are over.

Without being intentional, and thinking about whether you’re building an audience that’s right for your funeral home or cemetery, you’ll just have a room full of bodies (no pun intended). Numbers might look pretty, and make you feel good, but unless those people are likely to become paying customers, they're not helping your cause. Page ‘Likes’ are what we call vanity metrics - look good, but do not equal success or more preneed/atneed sales.

Building numbers that don’t matter also ruins your data - a major benefit of social media marketing. If you have 1000 Page followers, but 900 are, realistically, never going to spend money with your business, that means that all your analytics and audience insights are useless, making it even harder to establish a clear understanding of what your audience needs.

So, there you go. If you want Facebook to work for you, just reverse engineer this. Think about who your audience REALLY is, post good consistent content, and focus on the end goal rather than getting lost in numbers. If you do this well, you won’t give my hypothetical bank account that extra $1.