The Starting Point of Social Media Begins at the End 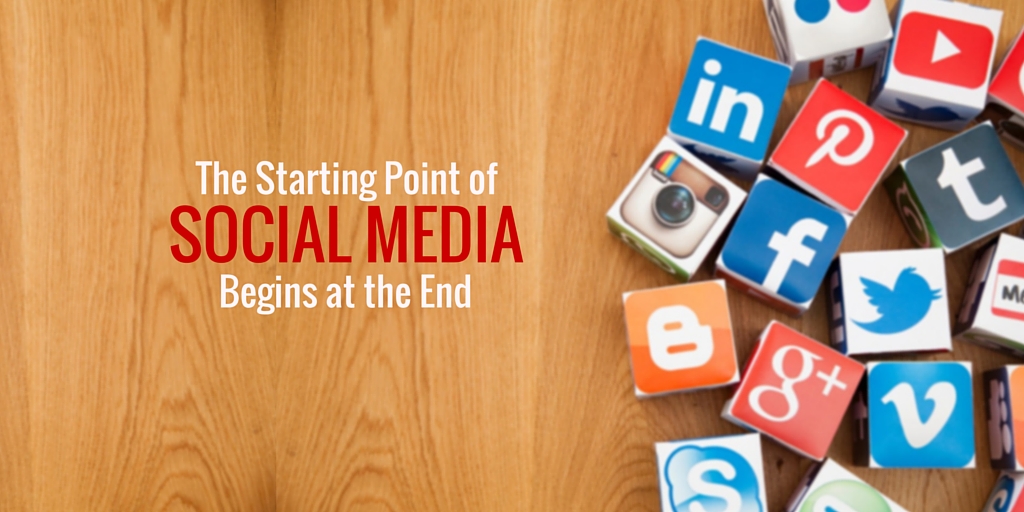 It sounds crazy that to begin a project you would start at the end. It would be like opening that new swank white desk from IKEA and flipping to the last page of the directions to begin assembly (although starting at Step 1 of the normal IKEA directions probably will get you as jacked up as skipping the directions completely). Starting at the end doesn’t make much sense in most life situations. Generally we are starting with the foundation and building from there, but social media is different. You need to see the end to find the beginning.

I can think of one analogy that may paint this a little more clearly for you. Go back to being a kid (for some of us…me…just picture last Saturday morning). I love grabbing a cereal box from the cupboard, pouring a huge bowl, and staring at the back of the box. Those clever games get me every time. Ok, back to the point. Remember the maze that was on the back of the Lucky Charms box? The easiest way to complete the maze was to start at the end and work your way to the beginning. I would do it with my eyes, get it right, and then grab a pen and work the maze – ruined it for my brothers, but I won!!

Social Media success happens the same way as the maze – start at the end and visualize your way back to the beginning. It’s reverse engineering. When you can see where you're going it's easier to get there.

This isn’t natural for most funeral directors. You are used to telling the story of someone's life, and most stories start at the beginning. So this process is going to be unnatural, but if you want it you will learn to think differently.

What is your social media North Star? What is it that you want to achieve with social media? Go beyond the norm. Find the one thing you want above all else. In 12, 24, or 36 months, if you were only successful with one thing through social media, what would it be? What problem in your business could you solve with social media? Not enough Preneed leads? No problem. Need to establish a more transparent and personal connection with your community? Piece of freaking cake (with ice cream)! Wanna pre sell mausoleum space? Llike stealing candy from a baby. Whatever that one business goal is you want to achieve through social media, pick that and work backwards. Reverse engineer to the beginning. That's the secret sauce.

Working backwards allows you to keep the end goal ,that North Star, in focus. Everything you do, the content you create, the posts you make, and the paid ads and sponsored posts you run are all predicated around achieving that end goal.

Most funeral homes never set social media goals. You aren’t putting the attention or value on social media that you should, and that, my friends, is why so many funeral professionals are losing the social media game. You put all of your resources and energy into trying to make the old methods work (print, radio, Yellow Pages) and you aren’t respecting how quickly they are diminishing and how loudly social media is dominating. You’re in love with the CoCo, and the CoCo is the old stuff, and you’re addicted (yes this is a reference to cocaine but it works in this scenario).

You want so badly for the old stuff to still work because you understand it, and the new stuff, frankly, scares the daylights out of you. You want the world to stop for you, and your business is in jeopardy if it doesn’t…because you aren’t willing to adjust. Anyone who doesn’t understand that we will continue to evolve as a society, with new methods, new tools, new communication devices, virtually reality (and I promise you it will continue and nothing will stay the way it is forever) has already lost the game. It makes me sick to see so manysuccessful death care companies and funeral homes losing because shifting and adjusting their strategy isn’t in the deck of cards for them. So let's do what most funeral directors are going to do, pick your head up and jam it in the sand. This is the reality we live, and it is a death sentence.

I'm not a visionary. I don’t see the future. I see the present and I react to it. I people watch constantly, and I pay attention to where people are going on their mobile device. I notice what my kids are into, and what apps are rising in the App Store. This tells me what the consumer is doing and where their attention is going – then I react to it.

Funeral directors don’t have to be any different, but you have to be different than you are now. Reacting and taking action is the only way to avoid losing. But to win the social media game you first have to start at the end and understand what success really looks like… then reverse engineer to the beginning. Know where you want to go, know what your North Star is, and cut out all the other bull crap that doesn't help get you there.

Finding the North Star isn’t always a cake walk. You really need to examine your business and look at your core problems to really understand what needs to change – use this to find your success North Star. To help you in this process we have created a social media goals worksheet that guides you down the path of finding your North Star and what you really want to achieve. You can download our free social media worksheet here: https://www.disruptmedia.co/social-media-goals-worksheet/

Schedule an online 30 minute demo to learn more about DISRUPT Media and how to reverse engineer your social media success: https://www.disruptmedia.co/demo